“The early days of motherhood were so tough.” ~ Lauren Tench

COPE Ambassador Lauren Tench shares her story as part of The Truth Campaign.

I struggled to fall pregnant for many years. When I fell pregnant I had really strong pain, so I went to the hospital and they found it was ectopic. I had a really bad experience unfortunately at the hospital; I was in and out until I had to have emergency surgery because the medicine wasn’t working.

It was so, so hard dealing with that when I thought I wouldn’t ever be lucky enough to fall pregnant because of my endometriosis and multiple surgeries. 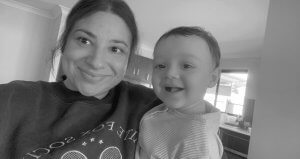 I suffered really bad anxiety and depression after the ectopic pregnancy and I was terrified if I fell pregnant it would happen again.

Thankfully, I was able to fall pregnant with Arlo. It was a long long journey. I remember in the beginning of my pregnancy I was absolutely terrified it would happen again. I was grateful to have the most wonderful obstetrician who I saw weekly until we could see bub was in the correct place.

I suffered major anxiety through the pregnancy and had a lot of complications including preeclampsia which caused Arlo to be born a month early.

Arlo’s birth was extremely traumatic. He was taken to another hospital and I was taken into ICU.

Unfortunately, my recovery with my c-section was extremely rough with my c-section scar opening and I was discharged before Arlo was able to come home. It was absolutely heartbreaking and I have never cried so much in my life;I never expected to leave the hospital without my baby.

I am so grateful to be a mum, but the early days of motherhood were so tough, I still have a lot of birth trauma to work through.

I still struggle today but I’m doing my best so I can be the best mum to Arlo!