“It was horrible” Britney Spears opens up about perinatal depression

Britney Spears has shared that she is expecting her third child – and has opened up a global conversation about depression during pregnancy and the first year of having a baby.

In a post to Instagram, Spears said she previously experienced perinatal depression, describing it as “absolutely horrible.”

“Women didn’t talk about it back then,” she wrote. “Some people considered it dangerous if a woman complained like that with a baby inside her. But now, women talk about it everyday. Thank Jesus we don’t have to keep that pain a reserved proper secret.”

Depression is the second most common mental health condition that can affect you at any time of life, but the likelihood increases during pregnancy, with up to ten percent of women (one in ten) experiencing depression during pregnancy.

Like anxiety in pregnancy, signs of depression may be attributed to other things, like hormones, tiredness and feeling uncomfortable, and, hence, the opportunity to get on top of the depression early and before the baby arrives has passed.

We know from our own research as part of The Truth campaign, that pregnancy can bring many unexpected physical and emotional challenges and can result in common mental health problems like depression and anxiety.

COPE research found that while a significant proportion of respondents described their experiences of antenatal anxiety and depression, often, these were not identified due to symptoms being misattributed as just part of pregnancy.

As pregnancy was a new experience, expectant parents indicated that they did not know what was ‘normal’.

Being my first pregnancy I didn’t know what was “normal” and whether I sat outside the realm of normal. I initially thought what I was experiencing was a part of being pregnant and it was largely hormonal. My GP was fantastic and was the one who raised the option of taking antidepressants and suggested making a referral to the perinatal clinic at my public hospital. I will be forever grateful that my GP raised these options with me and helped me to get that support.

Of concern was the number of women who were advised to come off their medication for anxiety and or depression in pregnancy.  This advice is contrary to the National Guidelines which recommends the use of certain classes of medications (SSRIs) for moderate to severe anxiety and depression.

Coming off my SSRIs abruptly when I learned I was pregnant and not being able to turn to smoking or drinking as a crutch (made my experience worse).”

“A more informed GP who understood that Sertraline is a safer option for women in pregnancy with pre-existing MH issues is better than complete withdrawal during pregnancy!

As a result many patients relapsed, and experienced a deterioration in their mental health, at an already vulnerable time in their pregnancy when these conditions are more likely to reoccur or arise for the first time in expectant mothers.

Jade, who shared her story as part of COPE’s The Truth campaign, struggled with antenatal anxiety and depression during her first pregnancy.

I think it would be reassuring if more people shared the struggles that they had while they were pregnant so you don’t feel as though it’s just you who’s struggling with it. 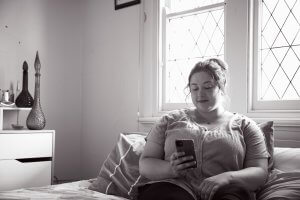 You can find support for antenatal depression in your local area by searching our e-COPE directory.