The transition to new parenthood came as a shock to Melbourne couple Nami and Andy. The pair are sharing their journey as part of COPE’s The Truth Campaign to shine a light on the way relationships can change after having a baby – and how to emerge stronger.

Nami, who experienced severe depression and anxiety, explains that the diagnoses “knocked her for six.”

“It wasn’t something I expected to experience at all. When our son was born, for while I thought it was an extension of the baby blues. I thought I was tired and adjusting to a new role.”

But she soon realised it was more than that and that putting on a brave face was no longer possible. “I gave a lot of time to my child and business and neglected our marriage and my self-care. It didn’t take long for things to spiral.”

“I glossed over how I was really feeling,” Nami says. “ Even in mothers group there were conversations where there were women struggling but we didn’t want to be the first to fess up. It’s easy to fib when you’re filling out a ‘how are you feeling?’ form. The form doesn’t argue with you.

I think the support was there, but I was scared to admit what I was facing. I was busy and tired, and I didn’t want to have to accept that I was dealing with something else on top of that.”

When she went to see her GP, Nami recalls crying and saying, “I’ve lost my grip now. I’ve lost control’. I made the decision to start medication.” But with that came strong feelings of failure. I felt like I’d been defeated. I think I resisted medication because I thought I could do it on my own. But life doesn’t work like that. I had sailed through school, uni, started a business. I could do all these things. But I struggled to accept the fact that I was having a hard time being a mum. I still have a hard time, but I give myself permission now.”

Nami remembers that at her darkest point she wanted to get on a plane and “go anywhere.”

At one point, I remember saying to Andy if he wanted to leave our marriage with our child then I would understand.

I thought he didn’t sign up for this. This isn’t the family that I thought we would have. I thought I’d be able to contribute in a really different way and that I’d ripped Andy off.

“When you’re going through this period and trying to navigate your way through, it’s difficult to see the warning signs sometimes when things are happening because you don’t have a reference point – you’re sort of making it up as you go.”

When Manus was around six months old, Andy remembers realising that Nami needed help. “Everything was just too hard and it had been going for quite a period. And I know Nami is strong and was trying to work her way through it. I realised that the best thing I could do was call PANDA – and say start talking.”

When you’re going through this period and trying to navigate your way through, it’s difficult to see the warning signs sometimes when things are happening because you don’t have a reference point – you’re sort of making it up as you go.”

Andy recalls feeling quite detached from Nami’s pregnancy, noting that while you can see the physical changes and emotional challenges it doesn’t feel real. “There’s an emotional attachment to it but it’s still quite intangible,” he says. “And then post birth, everything is about the mother and baby (relationship) unit and you’re still skirting around the edges helping and trying to be as active as you can. But that initial bond is difficult to achieve. It’s there but it’s a very different bond to the mother-child relationship. There are all sorts of challenges that go along with it. You’re making it up as you go.

“You form a relationship for a reason and the foundation doesn’t change when you have a child or when you have a mental illness. But reminding yourself of what those fundamentals are is important. Those challenges will pass. But there are times when it’s difficult to see beyond the day-to-day issues that arise. Especially if they keep arising if they’re not addressed.”

“Sometimes you don’t want to step in and try to fix a problem or take over because you might not get it right. You think that mum can do it because they’ve got that natural instinct and capacity to take it on, but the truth is you’re both fighting the same feelings and there’s more expectation on mum to solve these problems because that’s what mums do.” 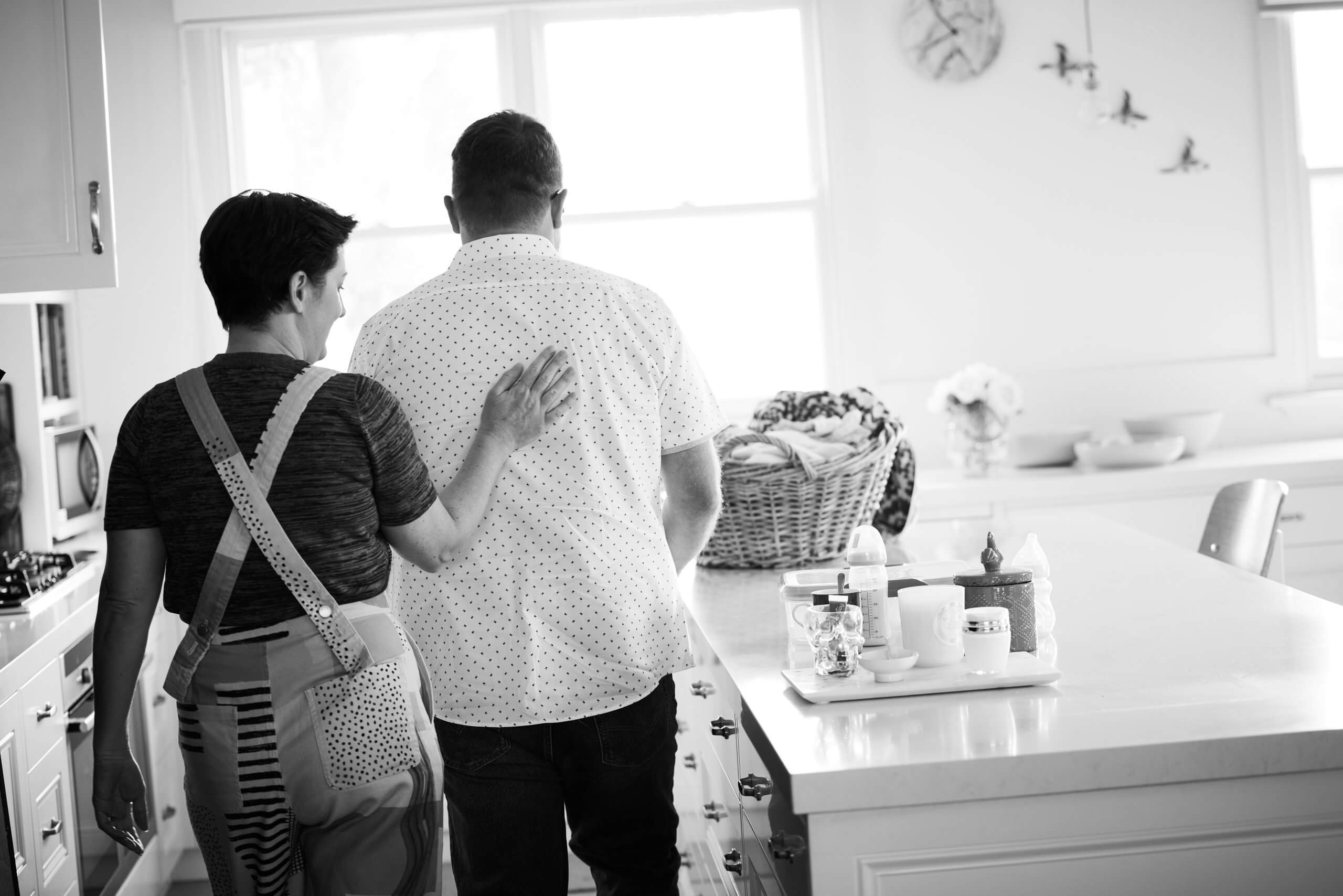 Looking to the future – together

“You don’t realise the damage things like depression and anxiety can cause until much further down the track when you’ve been able to take care of your mental health and you do a check on things and think, ‘we haven’t gone out to dinner for year. Are we still on the same path together?”

But while the early years were challenging, the pair believe their relationship is now the strongest it’s ever been. “I think it’s because we’ve learnt skills and built on our skills and we’re better at having conversations and not attacking one another,” Nami says. “I’m also getting better at recognising when the anxiety is talking.”

They’ve also sought counselling, on and off, through the years.

“We’re both quite brave individuals,” Andy says. “We’ll have a go at something different to see if it works.”

Nami, who describes herself as a talker, also feels that talking through her experiences and putting them out into the world helps her to cope better. “I’m not embarrassed anymore. it’s just who I am. I’m still accepting that it’s part of me. The more I saw a counsellor the more normal it felt for me.”

I’m not embarrassed anymore. it’s just who I am. I’m still accepting that it’s part of me. The more I saw a counsellor the more normal it felt for me.” – Nami

On reflection, Andy believes the couple had to go through the initial early stages of parenthood before they could regroup and decompress. “We’re stronger in crisis than in peace time when the lights and flashing has died down. I think it was about four months past childbirth when we started to see the first spiral.

Nami also shares feeling completely touched out. “You’re not allowed to touch your partner because you’ve had a baby on you all day. And I’d be watching the clock in the afternoon and Andy would walk in and I’d hand him Manus and just need to sit down and say ‘no you cannot touch me I’ve had someone on me all day.’”

“That’s confronting,” Andy says. “It’s confronting. It’s a bit demoralising. Your world is completely turned on its head and everyone tries to find their own way through.”

We’re stronger in crisis than in peace time when the lights and flashing has died down. I think it was about four months past childbirth when we started to see the first spiral.  – Andy

Their advice for parents

“Try to dedicate time to caring for yourself, and your relationship as you would caring for your baby. It’s a big job, but when all your focus is on your baby’s needs everything starts to fall away and they’re the things you need to keep going.

“They can be tiny things – as simple as, when your baby goes to sleep, sit and have a cup of tea and talk. You don’t need to go on lavish date nights. Go for a walk and hold hands. Talk to each other. Give your partner the space they need. You’re both going through changes so be as open and accepting as you can.

For Andy it’s all about communicating. “Just keep talking. Having open conversations and just being grateful for the time and moments that you get together or the assistance you’re providing each other.”

He also advises new dads to “just have go.”

“Sometimes it’s about rolling up your sleeves and getting into it. It’s not easy but it’s incredibly rewarding.”

Watch the full interview on the Mum Drum Relationships in early parenthood require constant readjustment with the arrival of a baby. Going from a two person family unit to three or more also takes some adjusting to, especially when this impacts on the quality and quantity of time that couples have for themselves – and each other.

It is important to acknowledge the changes that come with having a new baby. Many of these changes will be happening to both parents, and it’s important to keep connecting.

For example, whilst for women there have already been some adjustments prior to and leading up to the birth, for some men the reality of having a baby begins at the birth, as they have not experienced first hand many of the changes that have already taken place with pregnancy.

The arrival of your baby is also likely to mean that often the mother is overly focussed on the needs of the baby, and can cause fathers and partners to feel somewhat left out.  The demands of a newborn and greater focus on parenting may leave partners feeling overly tired, a loss of libido and feeling depleted and unable to give more to others at times.

It’s important that partners don’t take this personally, it is all part of meeting the demands at the time, and with time things should begin to settle down.